In the introduction to this series, we looked at the definition of culture, and then started to examine the culture of the Clemson athletic programs and fanbase. It was easy to see how the university marketed ‘Clemson culture’: family-oriented, unifying, football is the flagship, strong ties between athletics and the university.

I did a few experiments on social media. I went to my friends and Clemson groups on social media and asked, “When someone says ‘Clemson culture’, what does that mean to you? How would you define it?” After I gave them enough time to answer, I collected all the responses.

It was fun to read through the feedback. Some of it was straightforward and predictable. Some of it was a bit surprising. Different respondents answered in varying ways. Some were more focused on football, while some considered the whole university, often looking at student culture – but not always current culture. Many respondents were clearly alumni who were talking about their days at Clemson, which likely pre-dated the football teams current run of success. Some answers were quite long, while others responded with a single word.  Some were kind and considerate thoughts, while others were conceited and negative, the most common seen in the entirety of this experiment being the ”If you have to ask, you will never understand” comment. Overall, I think I got a good variety of answers from across the fanbase, but there was enough variation that it was hard to reach firm conclusions.

I decided to put all the answers in a ‘Word Cloud’, which is a graphic representation of text comments and feedback. Businesses often use word clouds to quickly get an idea of the most common words and expressions used when examining important information, such as consumer feedback to products, or public opinion about political races and figures. They are created by entering written information into a program, which then scans the text and counts the frequency that words are used. It then creates a ‘cloud’ with the most common words found in the text. Words used more often are larger, bolder, and usually more centered in the graphic. Other words used frequently are positioned around the major words in smaller font.

When I plugged all the responses I received from Clemson fans about culture, this was the result: 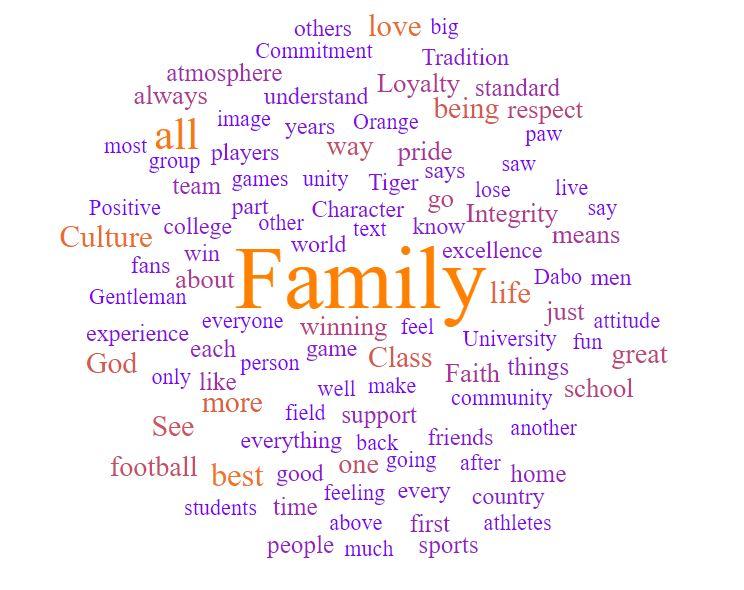 It isn’t hard at all to see the primary point expressed by Clemson fans: from their perspective, family is the most-important concept when defining Clemson culture, by a significant amount.  There are no other words that are even close to size of the word ‘Family’. Other words that we do see that stand out are ‘Class’, ‘Love’ & ‘Integrity’.  We also see ‘Football’ which shouldn’t come as a shock, since Clemson is widely considered to be a football school. We also see ‘Dabo’, which isn’t a surprise considering how much he influences Clemson culture, but it isn’t one of the most prominent words, which is something to be remembered for later.

There are two other words that do stand out: ‘God’ and ‘Faith’. This has been something many can point out about Clemson culture, particularly the football team, that at first glance would seem unique. Culture always starts at the top of an organization, so for the football team, it starts with Dabo Swinney. Coach Swinney has been very open about how important his Christian faith is to him, how it has shaped his life and his career. It isn’t unusual for a person to express a similar opinion about his personal beliefs, but it is unusual for a head football coach at a major university to speak that publicly about it, especially at a state-funded school. With Clemson being in the Bible-belt, Swinney’s words on faith have resonated with the fanbase, and are one of the reasons he is beloved by Tiger Nation.

I think the result of this experiment on Clemson culture is about what I expected, and I think most objective observers agree. I was not surprised the word ‘Family’ was the centerpiece of the graphic, but I was a bit surprised at how dominant it was versus some of the other words mentioned.

We do see some generic words here, like ‘culture’, ‘best’ & ‘great’. These words are often used when making comments, so the word cloud generator calculates that they are among the most common and includes them in the cloud. They don’t really provide much insight, but they are only a problem if they are the only words you see in the cloud. If you have better descriptors present, the generic words fall into the background.

As the Mythbusters once said, ‘Anything worth doing is worth overdoing.’

I decided to perform the same social media experiment with as many other major programs from across the FBS as I could. I attempted to get examples from each Power Five conference and the independents & Group of Five. I am a Clemson alum and completed my BS in 1997, but I also did my graduate work at Winthrop. While I am pretty much a one-team guy when it comes to most pro sports, I have always had favorites beyond my personal schools in college sports. My wife’s favorite teams, my parent’s, my sister’s schools, aunts, uncles, cousins, best friends – over the years I have pulled for those teams to be successful. As a result, I have always been members of fan groups to other teams because I like to follow them. That gave me a start on other schools I could research on social media.

That list wasn’t enough, however. My list of favorite schools doesn’t include a lot of powerhouses and bluebloods in college sports. To get a good cross section of influential colleges, I had to seek membership in a lot of other groups. Many of these groups have watchdogs. They only allow fans of the team, to keep trolls from harassing fans who are posting and discussing their team. I gave it my best shot to convince these groups that I genuinely pull for their program. I was met with modest success. In some cases, however, the bouncer denied me entry. In some cases, I was blocked and can’t even see that the group exists on Facebook anymore. When I was accepted, I asked the same question about defining culture that I asked to Clemson fans.

You could probably predict some of the results right now. Some would surprise you. Some schools you would think would have a much stronger representation on social media were big disappointments, while others you probably think of as minor programs had strong responses that looked eerily like Clemson’s word cloud. Some schools had just as strong a lean towards the words ‘God’ and ‘Faith’ as Clemson, perhaps even stronger.

Clemson Nation, you might be a bit surprised to know how close you are culturally to some fanbases you probably think are quite different from your own.

E12: All Out Blitz Podcast

As the Portal Turns

John Chancey There is no shortage of hot button issues in college sports today. NIL, realignment, targeting – there are a lot of things to

The Beef and Seldom Used Reserve talk ball: football, softball, basketball and BASEBALL as in the 11-0 Clemson Tigers and I dress to impress. We’ll